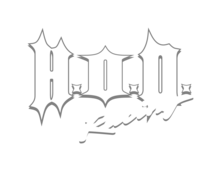 Q: How do you feel you have contributed for where things are now in this sport?

A: The banshee transmission overrides were a big deal for me. The first override I ever saw was in Paul Gas's lay down 3 wheel pro bike but only 1st and 2nd had the override as it was a 2 speed. I then saw one Brian Peterson tried to do on Mike Domans pro bike. I went through 7 trannys trying to get it to where I could get a 3 speed override in it and one to work long enough, when you split gears to override, it weakens them and they didn't hold for long. I sold my triple pro bike and years later bought it back and really looked at it and tried again to add 3rd gear and was able to make it because of my time doing Banshee overrides . I started doing trannys on my RD motors by learning how to make it shift without the clutch by splitting the gears. I then took it and applied what I knew to my 1987 Banshee. I bought it and messed with it until I perfected it... banshees were different then the Lay down bikes.

We had taken my Banshee that I did the override on out to the hill at Sand Mountain in Nevada and Rayce Muchmore had made some passes on it, when he got off he went and told his dad Kim Muchmore that he had to have a transmission like that... it shaved seconds off of the race and gave great advantage to a bike with an Override. Kim approached Me and asked me to cut a tranny for him, he had intentions of selling them. Once I cut the first one and they ran it Kim told me that I should keep this a secret and not show anyone because of the advantage it gave.  The need for Overrides on Banshees took off!! I extended and modified my stock banshee frame in 1992 and years after that it caught on and more people started doing it. I did it because being an old school asphalt drag car racer before this, I knew it would make it run better and faster with more weight transfer like in the race cars.

Between the port work, extended frame and the tranny it made my bike faster. Most stock frame banshees were running 5.60's on my home track in Glen Helen Ca, while I ran 4.60's ... confident in my work I then put out my fastest Banshee challenge in Dirt Wheels Magazine in 1994. We had some people show up to my home track to accept and take the challenge. Dan Staply with Engine Tricks showed up. He was a big competitor. He came with 3 banshees and riders. After toon ups they packed up and left. He could only run a 5.20 on methanol with no override. No one was ever able to win the fastest challenge against me at that time. ( see article )  Mark Legger a builder / fabricator came out to run one time at the track we raced at in Glen Helen. He thought he was going to run faster and be able to run numbers that my 750 triple lay down bike ran and after tune ups he came up to me and asked me "how far in my mouth is my foot" he had twin Honda motors. He couldn't even launch the bike or get the tires to turn. He ran 4.70's and 4.80's which were slower ET's then my Banshee let alone my lay down bike. 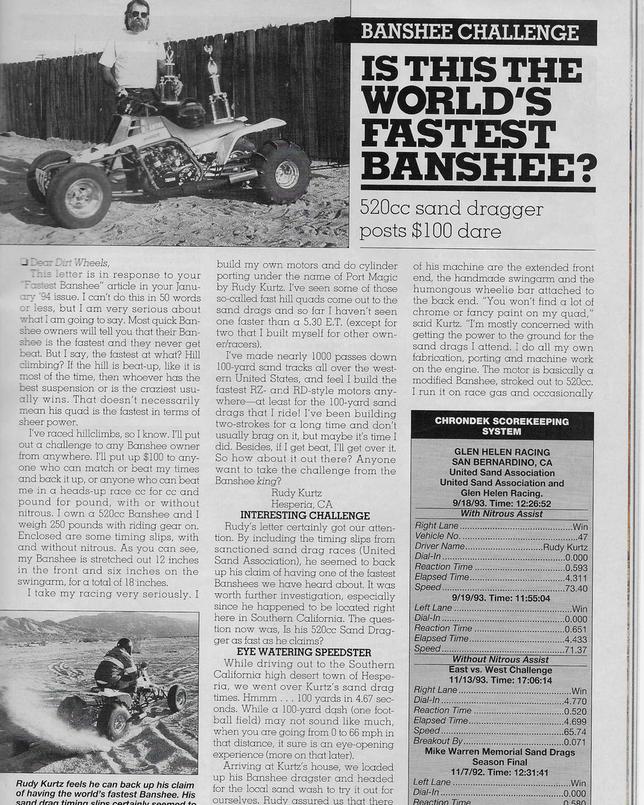 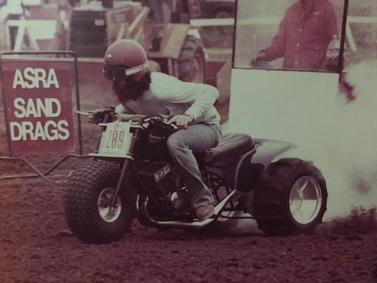 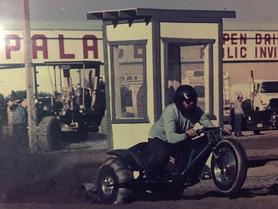 Some Of Rudy's Old Rivals

A: Port Magic Racing officially started in 1992 when we built the shop in the backyard of my house in Hesperia, California. I had been doing work prior to that out of my garage. When the construction company I worked for closed their doors, I put all my efforts into overrides and porting to start my business to make a living and provide for my family. 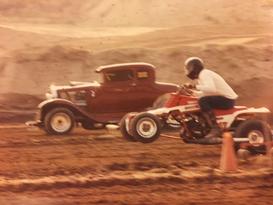 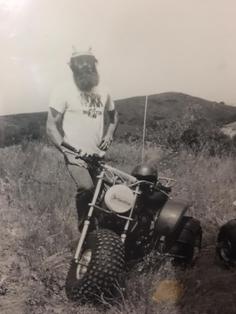 There was an indoor track that was a Mickey Thompson race where they went down to do a filming for tv and Mickey Thompson approached Rudy and asked him to put on a good show for everyone. They made him and all racers wear a belt that that harnessed from a Hydraulic wheel and it stops you and snatches you at 200 feet so you had to hang on to the bike.  Jim Scribbs, a friend of Rudy's unhooked him self from the harness and went down through the parking lot instead!!! There was no shut down because it was indoor so they had to do it that way....Great memory!! 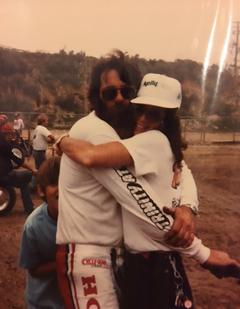 What song gets you pumped when getting ready to go racing? -

Dazed and Confused by Led Zeplin 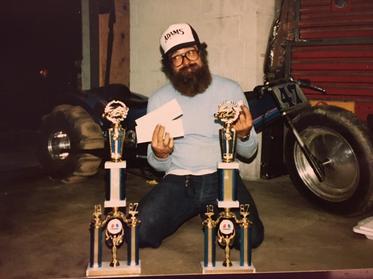 As racers, sometimes we forget how this sport got to where it is today and who was a big part of the evolution.  There is a lot of history that was never captured from cell phones like we have today.  Not many can say they have over 40 years drag racing ATV's.  Living in Nevada, at 70 years old with 2 kids and 7 grandchildren, the passion of drag racing atv's continues to flow through Rudy Kurtzs' blood.  We recently were able to work with Rudy Kurtz daughter, Jaclyn Wehrer, to help us interview with her dad.  I myself have learned a lot about Rudy in the past year researching what all he has done for the ATV drag racing community.  He started racing cars in 1965.  It all began on asphalt but the drag strips all slowly 1 by 1 closed down in California.  In 1980 he started racing sand drags in Riverside, Ca.  I had the pleasure of meeting Rudy last year (2017) at the Bako Sand Drags in Bakersfield, Ca.   As I set in the pits in Bakersfield, Rudy was always by his daughters side, getting her bike ready to race and checking it over to make sure everything was safe.  All I could see was Daddy and his little baby girl, all grown up, racing just as he had done for years.  One word to describe it, AWESOME.  These moments like this are what families and friends will cherish with for years and years.  Another great memory from that race, there was a racer in the staging lanes just a few bikes away from being his turn to race.  He was having troubles getting his Yamaha Banshee to start.  Every racer in staging was surrounding this bike trying anything and everything they could to get this poor guys bike running.  Needless to say, the bike didnt start, but out of nowhere guess who pops in that crowd of racers to try and help, RUDY KURTZ!!  Rudy jumps in and starts looking over the carb and checking some fuel lines and then he just flips that kick start lever out and just start kicking the piss out of that bike trying to start it.  There stood racers, some that had not even been born when Rudy had started racing, watching a 70 year old legend to this sport not think twice about helping his fellow racer out.  It was truly a moment I will never forget, thank you Rudy.  Now to the interview....... 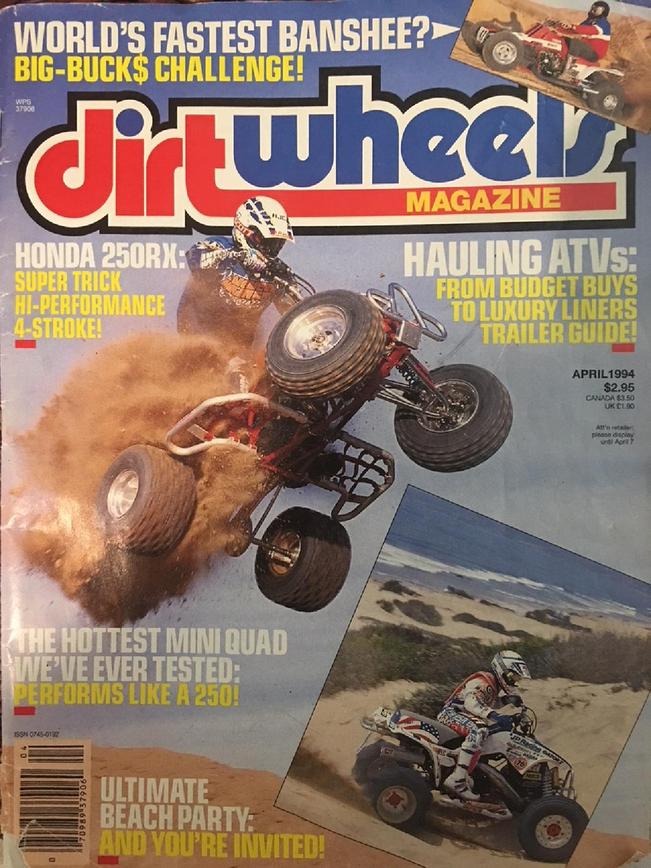 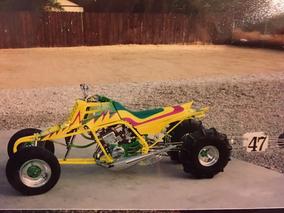 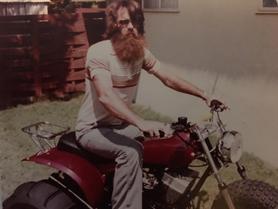 Q: What was your greatest accomplishment

A: I ran a race up in Northern Californian in 1985, the classes were set up that if you could win your class you stepped up to the faster class to race the winner. I won class D on my RD 400 motor and set the record. Then I would have stepped up to C pro bike with my RD 400 but I had already won pro bike class C with my 750 Triple and couldn't race myself. I set the record with RD400. So I stepped up to B with my 750 triple running in an 800 cc to 1100 cc class, then had to run Kenny Adams and I won that class and set a record. Then got to step up to class A pro bike and ran against an 1100 Cc 4 cylinder Kawasaki and I won that class also. Ending the weekend with a 4 class win with both my bikes was a great accomplishment for me and I'll never forget it.

Another memorable event as a builder was when a rider set the record in 2003 for small triple.  He built the motor for Robert De La Hoya.  It ran a 3.3's to set the record at Dome Valley.  Back then that was a fast triple. 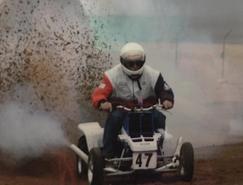 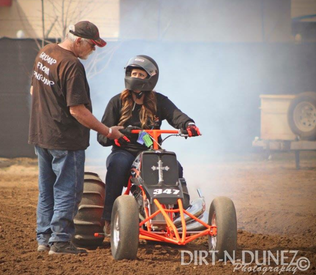 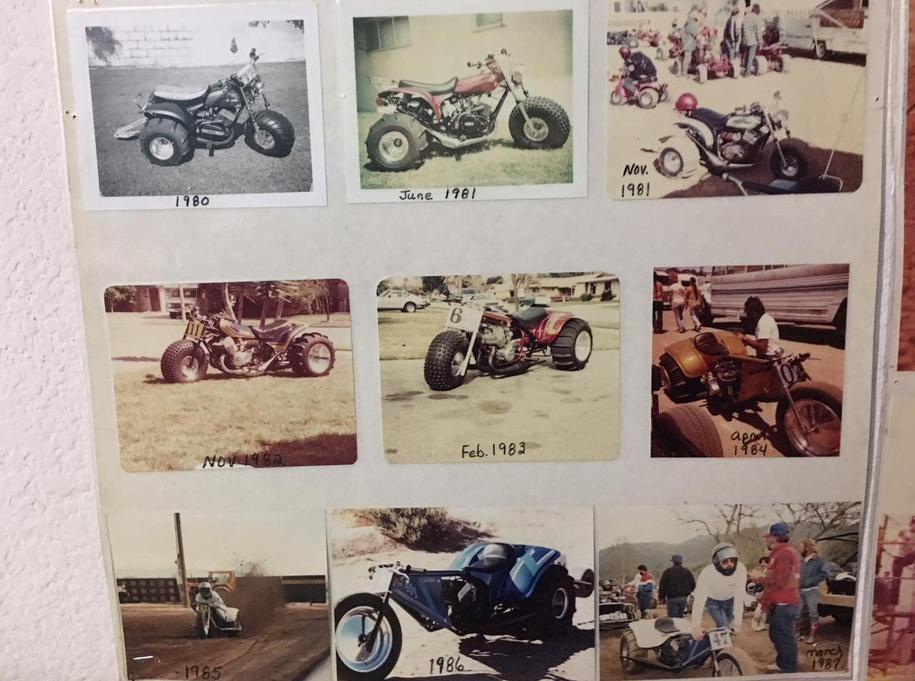 Q: What would you like to see happen with this sport...

A: SAFETY and more of it. A lot of people got hurt back in the day and we grew and learned from it. We made modifications to make the bikes safer. It seems like that's all gone away and no one pays attention to it. Our association we raced for required foot peg guards behind and under the pegs, chain guards, wheelie bars, full long sleeves, gloves, motocross race boots not work boots. I watched my friend Bob Sechi get his leg stuck in the rear sprocket after he flipped his bike and it sawed through most of his shin and was left hanging by a ligament. He was wearing work boots. I had to take the wheel off the the medics could get his leg out. It was after that they required motor cross boots for all bikes. I've seen chains snap and slice open people's backs because they had no chain guards. We need to have more and better safety rules. 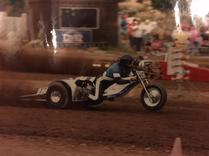 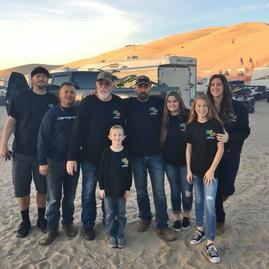